Goal Setting | Write that sh*t down!

If you’re reading this, I would bet almost anything you’ve had a Coach or a Mentor tell you the same thing. Hopefully after you read this piece you’ll believe in it so much that you can’t wait to get to writing your own.

Quick anecdote for ya- My high school wrestling Coach, whom is still a mentor to me, used to have us write our goals down on an index card and tape them in our lockers. Without fail, he asked that of us each season. Coach Martin requested just 3 team goals, and 3 individual goals that we wanted to achieve. Each year I did it and became a bigger believer as time flew by to my senior year. Along the way I accomplished a lot of them, but also failed to achieve a lot of them as well. I remember being annoyed by the task as if it were a homework assignment. Call it what you want, but that was, and still is the best lesson I’ve ever learned to this day. Now, as a Coach aspiring to be as great as Coach Martin, I feel obliged to pass on this lesson to all my athletes, regardless of age, sport, or vision quest. Paying it forward is the right thing to do. There’s no better feeling as a Coach to have a grand impact on a young athletes life as Coach Martin has had on me. If the lesson is instilled strongly enough, that young athlete will carry it with him/her for the rest of their lives.

It’s only fitting after that short story to share a similar one that I experienced with one of my wrestlers recently. Just as Coach Martin did, I request each season that the wrestlers write on an index card 3 team goals and 3 individual goals. I explain how to make statements with conviction so they truly believe they can achieve those goals. I also encourage the team to make notes about how they will reach their goals and the sacrifices they might have to make. We discuss checkpoints, deadlines and overcoming adversity in order to stay the course. I always offer extra help in reviewing their goals at any point in time. Throughout the season I check in with the wrestlers individually to make sure they don’t lose sight of their goals.

Quick question: Out of about 40 wrestlers on the team, how many do you think actually take action?

If your answer was less than 50% you’re absolutely right! In fact it’s probably closer to 25% or less. I’ll never understand that bc there is so much proof that goal setting works. Success leaves clues and goal setting is an obvious one.

Senior Mike Criscione took the advice that I’m passing on from Coach Martin seriously and it paid off, BIG time! What’s even more impressive is that he only started wrestling in 10th grade, which in this era is about 6-8 years too late.

Mike also happens to train at my gym, which means I ask the same thing of him almost all year round (I do this with any go-getter that trains at JVH, not just wrestlers). He set goals in training, off-season wrestling, and for his senior season. He made the full commitment to his goals and eliminated any distractions. We had private meetings to discuss and re-evaluate his goals. Some of which ended with me ranting and getting fired up about believing in himself and making things happen! It fires me up BIG time when a young athlete is on the cusp of achieving a highly sought-after goal. Sometimes, all they need is a little extra push! Mike often asked for extra workouts, stayed after practice to improve on weak areas in his wrestling game, we broke down film of matches against opponents… You name it Mike did it. He never complained, never skipped, battled through injury, overcame losses and learned from mistakes throughout this time.

Here’s a snap shot of some broad goals he wrote early in the off-season:

At first, he wasn’t specific enough so I told him to dig a little deeper…

Later in the off season as it the summer flew by Mike dialed in his goals both in training and for wrestling:

Finally, he wrote his goals again at the start of the season:

*Note the collection of index cards. It’s a stack of goals written by wrestlers, adults, athletes of other sports, meatheads...I carry them with me and review them often so I can check in and give feedback to those go-getters with a bigger purpose.

Throughout the season Mike did a little bit extra each day. He also has a great support system in his family and the two other wrestling coaches for our team. None of us are afraid to put forth a little extra effort for any wrestler who asks or needs it.

To date, Mike has already accomplished a bunch of those goals, but he also failed at a few as well. He earned a Section Title, which qualifies him for the NYS Wrestling Tournament this weekend, a feat that none of his counterparts or most other Coaches expected. Suffice it to say I wasn’t surprised the least bit:

If he places at the State Tournament, Mike will have earned himself All-State honors, an accomplishment that he didn’t even have as one of his goals. Although Mike didn’t reach all of his goals, he did reach most of them. He still has one more goal left that he wrote down, which is winning 35 matches this season. He can certainly do so up at the NYS Tournament. Hopefully, it leads him to the podium as an All-State wrestler! Stay tuned for the outcome…

Hopefully, this motivational story will help you achieve whatever you’re after. At 30 years old I can truthfully say the impact my mentor Coach Martin has had on me is as strong now as it was when I was 13. I practice goal setting on a regular basis. That lesson has helped build a successful business, one in which I started in 2009 right after the economic crash of 2008. I just bought the home of my dreams for my family and have used goal setting to improve my craft as a Coach so I can pay it forward to as many people as possible.

Is it easy to achieve your goals? Absolutely not!! If you’re pushing yourself enough you will get as uncomfortable as you could ever imagine. I urge you to stay the course, learn from your mistakes and continue to go after whatever you’re truly passionate about. It’s a bumpy ride, but you CAN, you WILL, you MUST!! 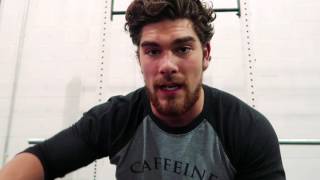 Don't GIVE IN. Never GIVE IN.

Do You Believe In Your Program?

Hypertrophy From High Reps Only?